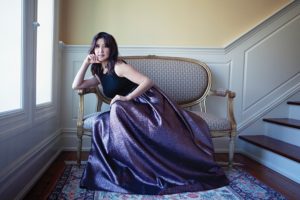 While some of us baked bread, sewed masks, or doom-scrolled through the latest “Breaking News,” internationally-celebrated pianist, arts advocate and educator Min Kwon was busy Zooming with American composers, from aspiring young students to Pulitzer Prize winners, from as young as 20 years old to as old as 93, inviting them to come together and contribute their unique, individual talents—to create something altogether new—much like the American experiment itself.  Though it would end up both enabled and shaped by it, the idea of bringing American composers together to write variations of “America the Beautiful” wasn’t born of the pandemic. Inspired by the famous Diabelli’s variations written over 200 years ago in Vienna, Kwon already had the vision to create something fresh for the 21st century before the pandemic hit in March. Almost a year later, she has a compendium of over 70 variations on what’s often been called “the national hymn.”

Tickets can be purchased here