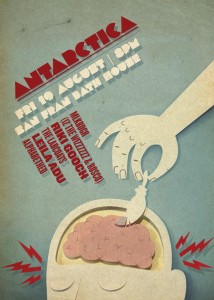 Antarctica – that wide, white space, a place where the imagination is free to roam. You will be taken to the musical equivalent of a place like that: Leila Adu, Riki Gooch, Alphabethead, The Labcoats and MLKBDGR have the staple secret. They can take you there.

These are artists-as-explorers. This is sonic excavation. Something you can really dig. 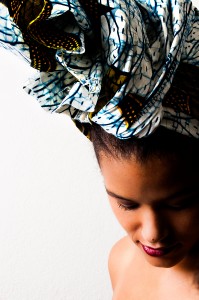 Leila Adu is readying her fifth album – she’s fresh from winning MTV Iggy’s Artist of the Week and has returned to New Zealand from her American home-base to tour and record. In recent years she has wowed audiences across Europe and America. She has performed improvised and composed pieces, as a solo artist, in small combos and with larger ensembles – she has two tracks featured on the upcoming album from Italian electronica act, MDF. Leila writes songs that are tiny but bold; huge but obtainable. She is a unique voice as writer and composer; she’ll take you to an aural Antarctica – a place of infinite discovery.
Media Relations/Hi-Res Images

Riki Gooch has produced solo singers, backed folk-pop players; he masterminded the Eru Dangerspiel big band and has played with a couple of other bands you might have heard of. Is he Wellington’s own Moondog? Or is he the Capital City’s Fela Kuti? Riki has created soundscapes across electronica and dub; he sits inside the beat while living further beyond the fringe. He has a heavy metal bebop inside him that pulses deep. For this performance Gooch will be performing his Cave Circles EPs with video artists Toby and Melissa Donald. And Ant Donaldson will be on stage with Riki. They’ll take you to an aural Antarctica – a place you have never been before.

Alphabethead is a wizard of the turntables – a composer who places found sounds in surprising new contexts. He takes tunes you think you’ve heard before and makes tunes you’ll never hear again. He charts his own path through almost every genre. With Alphabethead it’s always a fresh journey through the past to the future. He can take you to an aural Antarctica – he’s a sonic navigator.

The Labcoats is an improvising collective that knows how to uncover a buried groove. They have science at their fingertips and wear their art on their sleeves. No turn will be left unstoned in the search for a new jazz; a new way to groove – a new set of moves. The Labcoats will lay you out like patience itself has been etherized and feeling stable. They’ll take you to an aural Antarctica – they may just build you a brand new one.

MLKBDGR – will be providing the glue; the invisible threads that stitch the spaces together between these vibrant acts. MLKBDGR will take you to an aural Antarctica – he’ll steal one for you; he’ll slip it to you quickly.

AH “Alphabethead amazed and dazzled with his rapid and accurate hand work, sliding effortlessly from turntables to sliders to switches and balance – no wonder he won – this is a man possessed.” – Melbourne ‘In The Mix Awards’

LA “This young New Zealander of Ghanaian descent treats genre distinctions in much the same way that Godzilla treated those little cities made out of cardboard.” –MTV Iggy

Antarctica artists are available for interviews at: point 3 recurring and leilaadu.com

Tickets – Under the Radar 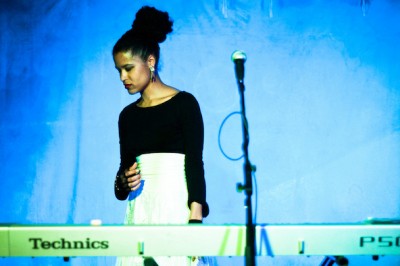 Leila Adu has completed the European leg of the ‘Ode to the Unknown Factory Worker’ CD Release Tour and she hits the States again in the Spring. She played in duo with Orlando Greenhill with Pitch Like Masses, Falsetto Teeth & Peter Mayer in LA and continued through Europe with the ‘Ode’ drummer Daniele de Santis, along with Mills Projects, Dead Days Beyond Help, Limeheaded Dog, Poino, Otto Fischer & Dave I.D.

‘Ode to the Unknown Factory Worker’ has garnered reviews by Beverly at MTV Iggy, Kambui at URB ALT, Gianluca Diana of Alias and Rock IT, Antonio Pellicori of All About Jazz Italy, Giancarlo Turra of Sentire Ascoltare and Enrico Bettinello of Blow Up, among others. The CD is available online and as a physical import in the U.S., as well as in selected European stores. Thanks to everyone who has already purchased ‘Ode to the Unknown Factory Worker,’ as well as Leila’s previous albums!

The ‘Fortuna’ video single directed by Boston Fielder has been viewed 660 times in 5 days, with an independent marketing campaign. Leila is already working on a new avant-garde electro song album with hot producers around the globe and will be represented at SXSW 2011. 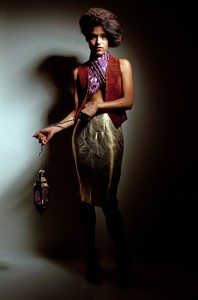 New York, NY—Leila Adu reemerges to the international music scene on January 18th with her powerful new album “Ode to the Unknown Factory Worker.” The 11 song CD is a raw musical travelogue of uncertainty and triumph in the exciting nomadic life of the popular New Zealand/Ghanaian singer-composer-multi-instrumentalist. Touring the globe solo and with band throughout 2009-2010 in support of her Steve Albini produced “Dark Joan” LP, Leila received a spontaneous opportunity to return to the recording studio from Rai Trade/Tracce, the Italian National Radio label. The resulting album, “Ode to the Unknown Factory Worker,” primarily features her dark yet humorous songs in naked arrangements for solo voice and piano/electric keyboards. Accompanied on 4 propulsive tracks by drummer Daniele De Santis, Leila’s quirkily structured compositions speak the language of pre-war blues, sci-fi environmentalism, post-rock world music, immigration electronica and Bing Crosby.

Leila Adu has mastered the art of forging smart outsider music with a warm accessible pop core. The worldwide CD release of “Ode to the Unknown Factory Worker” on January 18 is a call for celebration and reflection. It is Leila’s determined step in the journey towards a new global folklore merging primal traditions with an electronic future.

Leila Adu at All About Jazz

OK, so I’m more of a “what’s next?” than a pat yourself on the back kinda girl. That means I have to make myself look at what I have achieved with the support of some beautiful people. Here’s a short chronological list:

— Toured to UK, Italy, New Zealand and US with Dark Joan album (see below)
— Launched Dark Joan video in London with director Stephen Bain, Nisha Madhan and school children from Ambrit Rome
— First shows with other musos in the US – Orlando Greenhill in LA and Federico Ughi & Andrew Weeks (New York) for URB ALT Fest 2010 @ 92Y, New York
— Produced ‘Ode to the Unknown Factory Worker’ album in Rome with drummer Daniele de Santis (Jan 18 2011 global release date)
— Had stunning shots with world-class Atlanta photographers Tania Calderòn (see above) and Leon Dale
— Recorded a new demo album of electro pop songs in the US
— Started this blog for photos, videos and impressionistic splashes of thought
— Transitioned with the sheep from facebook group to the snazzy new facebook musician/band page 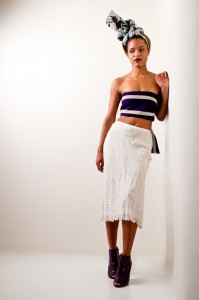 “The BeatStylist recently had the pleasure of chatting with singer/songwriter/composer/musician Leila Adu, whose fourth album Ode to the Unknown Factory Worker is out now…”Themes are along the lines of our current armageddon/global disaster zeitgeist, portrayals of women, consumerism and good ol’ attraction and loving woes.”” Read full interview at The Fashion Cult 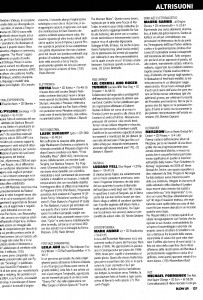 “This new work recorded for Rai Trade’s beautiful Tracce series, sees her [Adu] in almost total solitude (in four songs she is joined by Daniele de Santis on drums) and comes to grips with a singer-songwriter with extremely sparse piano and vocals yet rich with off-kilter digressions. Splinters of folk, of blues but also hypnotic and ghostly prog [absit inuria verbis!] that move away from the more popular terrains and put her in a personal sphere with which you want a little time to familiarize yourself. Fascinating when you become attuned to it. (Click photo for full review in Italian)

Next month, the new album Ode to the Unknown Factory Worker is out on the Italian National Radio label, RAI Trade/Tracce, in the UK, USA, Germany, France and Japan distributed by Goodfellas. Tracce has achieved critical acclaim due to their previous releases including experimental legends Robert Wyatt, Anthony Braxton, Amiri Baraka and Matthew Shipp.

In Atlanta, Georgia, Leila performed on the outdoor stage at Centennial Olympic Park with Stoni Taylor and Miles of Stone and had two promo shoots. 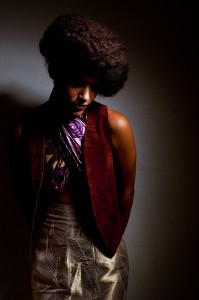 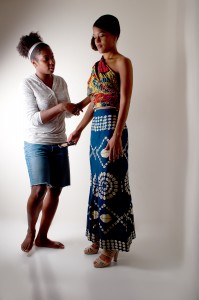 Award-winning Atlanta based UK photographer, Leon Dale, shot Leila who was dressed in African inspired garb by Eighty Jane, the Nigerian/American fashion stylist/poet which will feature in her hip chique fashion blog www.thefashioncult.com. 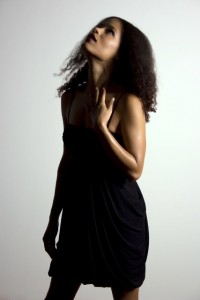 Also coming up in 2010, Minus Habens, the electronic label who have been releasing legends such Brian Eno, Depeche Mode, Angelo Badalamenti, Aphex Twin and Cabaret Voltaire will release MDF, the electronica project of De Santis. Tracks from the album feature Leila including the pre-release single “prendi uno” which was featured on New York based online community and festival URB ALT’s digital download sampler with Flying Lotus, Gonjasufi and Jneiro Jarel. Leila is now working on a new solo album for 2011 using ‘Ableton Live’ to produce the set of electronic songs.